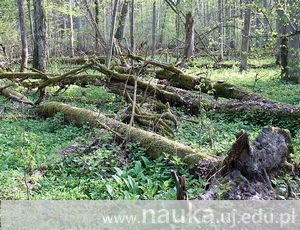 Wood constitutes the vast majority of organic matter in our world. Why is it, then, that we’re not buried metres deep below a growing pile of dead wood? Dr Michał Filipiak, a specialist in natural recycling mechanisms, provided us with an answer to that question.

When a tree dies, its dead trunk decays and frees up some space for new plants. The problem is, decomposition of wood is a very difficult process. ‘Wood is highly resistant to decay, and it’s not very nutritious to boot. It doesn’t provide good sustenance for the decomposers that feed on it – in fact, it may even lack key elements needed for their growth, development and maturation. The only two things it’s abundant in are carbohydrates cellulose and hemicellulose, but they’re simply not enough’, Dr Michał Filipiak said.

Nevertheless, there are daredevils who aren't afraid of starvation and even thrive in the long, dark, winding tunnels dug in dead trees. How is it possible?

Sapro-xylophagous organisms (also called saproxylic organisms) are animals, mostly arthropods, who feed on wood – trees and timber. If it wasn’t for them, we’d be long buried beneath a giant mass of dead wood. They play a key role in the process of decomposition. Decomposition allows for chemical cycling, a repeated circulation of compounds that help organisms to grow and develop. Every living thing on our planet, from bacteria to elephants, is part of this process. Organisms that feed on dead matter use it to create the living tissue that makes up their own bodies.

A living organism is in itself an ecosystem: its gastrointestinal tracts are home to symbionts, i.e. protozoa, fungi, and bacteria that can benefit their hosts. It’s commonly thought that it’s the symbionts that process the dead wood in order to provide sustenance for saproxylic organisms – but how do they do it if their food has so little nutritional value? The problem is related to the law of conservation of mass, which states that in order to produce a desired organic compound, the organism needs to possess all its ingredients (atoms of specific chemical elements). Dead wood consists of carbohydrates, lignin, and resins. They're all made up of carbon, hydrogen and oxygen. It’s not enough to sustain an organism, even if we take into account the fact that some symbionts can obtain nitrogen from air.

So where do saproxylic organisms get their sustenance from? The answer is fungi.

During the first few years of decay, dead wood’s chemical composition is altered by fungi. Their thalli (a word used to describe a body of a multicellular non-moving organism in which there is no organisation of the tissues into organs) grow into the wood, and are connected to the outside environment. From there, they can draw the chemical compounds the fungus lacks and introduce them into the wood. This is true both for organic and inorganic compounds: fungi can ‘digest’ rocks and ‘hunt’ organisms living in the soil.

Larvae of sapro-xylophagous organisms bore into the thallus-filled wood, accumulating compounds that allow them to grow and develop. However, the process is still very slow because of the low nutritional values of the fungus-wood mixture.

‘Saproxylic insects are very slow to mature – they spend several or even several dozen years in the larval state! Slow growth over a long period of time allows them to gather enough compounds to turn into an adult. This is possible thanks to the unique environment found inside dead wood: safety from predators and mild microclimate’, Dr Filipiak explained.

The best recycling system on Earth

Dr Filipiak studies one of the most basic natural processes: chemical cycling. He tries to learn more about our planet’s ecosystem and how it’s shaped by abundance or lack of specific nutrients and changes in available foods. These variables affect the environment in many ways. One of the consequences is the decrease in numbers and diversity of bees and other pollinators, which are important from the economic point of view.

In the case of saproxylic insects, Dr Filipiak studies involved biological stoichiometry. It describes the proportions between different atoms of different chemical compounds found in those insects and their potential food. Over the course of four years, hundreds of saproxylic beetles and their larvae have been extracted from dead pines in Niepołomice Forest and subjected to chemical analysis. As it turned out, the presence of fungal thalli in dead wood benefits the insects to a great extent, providing them with nitrogen, phosphorus, potassium, sodium, magnesium, zinc, and copper, which they wouldn't be unable to acquire in any other way (in such large amounts at least).

The atoms of the aforementioned elements are the key building material for the bodies of insects. The thallium serves as a multivitamin pill, allowing them to survive in a nutrient-less environment. Without it, dead trees wouldn’t disappear like they do now. Fungi use dead wood as a source of energy. When they penetrate it with thallium, they introduce nutritious molecules into it. This helps sapro-xylophagous organisms to ingest it and crumble it into smaller fragments – and that, in turn, helps the fungi.

‘Thanks to the complex relations between dead wood, fungi and saproxylic insects, vast amounts of organic matter are constantly being decomposed and don’t clutter up our planet. It’s the most efficient recycling system on Earth’, Dr Filipiak added. 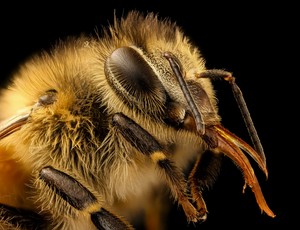 A few difficult questions about bees